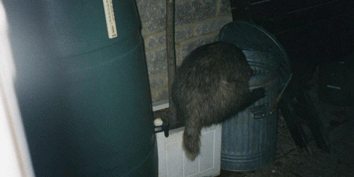 Badger In a Dustbin

“When we first moved to this house we used to feed birds with peanuts and food made from a recipe from a wildlife book ( bread put through a food processor , mixed fruit, oats & margarine. Melt margarine & then mix well ). This was put out on the bird feeder & also in flowerpot saucers for ground feeders. We could not understand why the saucers were disappearing then one night happened to see a badger running off with a saucer in its mouth! A check the other side of the hedge revealed where the missing saucers had gone.

From then on we were buying peanuts to feed the birds AND badgers so were getting through a sack about every six weeks or so. We initially kept them in a plastic dustbin but when we were on holiday squirrels bit a hole in the plastic lid & those they left were swimming in water. To improve this we bought a metal dustbin. The badgers soon found that if they put their noses under the lid they could push it off & help themselves to peanuts by standing on a tub & putting one foot in the dustbins handle. To stop this I put a bungee rope over the top of the dustbin but this did not stop them.

The one in the picture was persistent so one night when he had his head in the dustbin I opened the conservatory door & after I had taken his photo told it to “ go away” at which point it fell into the dustbin & the bungee snapped the lid shut! I was left outside with a badger inside the dustbin & was not sure what to do when a nose appeared shortly followed by a head & it then shot out of the dustbin & ran off.

Bye bye dustbin to the garage.”