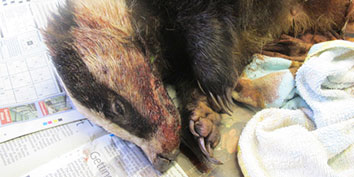 After hearing shooting in the night last week, a young lady discovered a dead badger in Edington, Somerset. The badger was taken to Secret World Wildlife Rescue where it was discovered that she had been shot, and tragically it became apparent that she had recently had cubs.

The badger was a young female in good condition and sadly was lactating. She was found on a badger path trying to get back to her sett. The veterinary report stated that she had been shot with a rifle shot through the abdomen and would have died from bleeding out or shock. It could have taken minutes or hours for her to die.

Through the expertise of Secret World and their work with cubs, it was obvious from the condition of the badger’s teats that the cubs would be less than a week old and would be unable to come to the surface through hunger. It would have taken those cubs a week to die.

Pauline Kidner, Charity Founder, said, “We are seeing an increase in persecution of badgers. This is not the time of year that a licence for culling would be in place, nor was it in a cull area. This has been reported as a wildlife crime and anyone with information should contact Police Wildlife Liaison Officer Pete Wills on 101. Sadly, misinformation regarding the infection of badgers with bovine TB has meant that these animals are much maligned. Working with badgers as we do, we know that, as the science shows, the implication of badgers in this terrible disease is greatly exaggerated.”

“It is always so sad when we see cases like this and we work to inspire people to love and protect badgers, and to raise awareness of the threats to them such as tragic persecution cases like this.”