This is a story of dedication, caring and collaboration to help a wild young animal that had a serious problem.  It is a story with a happy ending, which could have been quite different, and it is one with an important message.

It all started with a call to our 24/7 Helpline just before midnight on the 20th June from a lady who lived in Bristol.  She was very upset because one of the three cubs which visit her garden each night with their parents had something caught round her body.  I told her that there wasn’t very much we could do that night but if she called me back the following day, we would be able to formulate a plan to try and capture the cub.  It was clear that whatever the cub had caught around its body would begin to cause it major issues as it grew and we needed, if possible, to capture it.

Fortuitously one of our Committee members who knows that part of Bristol very well agreed to pick up one of our vaccination traps a couple of days later, take it to the lady’s garden and explain how she would have to set and watch the trap and manually trigger it if the right cub went inside.  This would take patience as there were 4 other badgers and 4 fox cubs coming to the garden each night as well!

Very late on the third night the right cub, called Rhubarb, went into the trap but one of its siblings called Custard decided to join it.  The lady decided it was now or never so triggered the trap catching both cubs.  As instructed, she quickly covered the cage up, so they felt safe, and early the next morning both cubs were transported to Secret World Wildlife Rescue.

The cubs were separated, and Rhubarb was taken to Quantock Veterinary Hospital to be sedated, have the cable tie removed and checked out for any injuries.  She was an incredibly lucky badger cub as the cable tie was not tight around her body and had not caused her any injuries.

She was taken back to Secret World Wildlife Rescue to join her sibling and recover from the sedation.  Having had an overnight stay at Secret World Rhubarb and Custard were ready to go home that evening.

They were taken back to the lady’s garden arriving just as it was dark and released safely back home by the lady and her husband. Video will be available in due course.

An hour after release all three cubs were seen back in the garden again reunited! 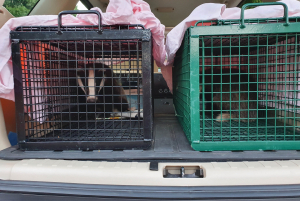 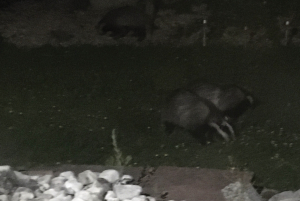